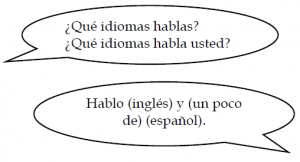 (yo) hablo I speak

The letter r represents a sound similar to English tt in butter, better, or dd in English rudder, riddle. The tip of the tongue goes up to the roof of the mouth, taps once quickly, and comes down again.

The double r is pronounced not with a single flap of the tongue against the roof of the mouth, but with several flaps in rapid succession, producing a sound like a child’s imitation of a motor engine. This sound is also represented by the single letter r at the beginning of a word, and after the letters n or l. If you have trouble pronouncing this sound, try curling your tongue slightly back and up to touch the roof of your mouth. With the tongue still touching the top of your mouth, blow out until the tongue begins to vibrate.